Jayne performs magic at venues all over the UK and with very few professional female magicians around the world, Jayne has been booked to appear in other countries too, including as far afield as Dubai.

Female Magician At The Top Of Her Trade 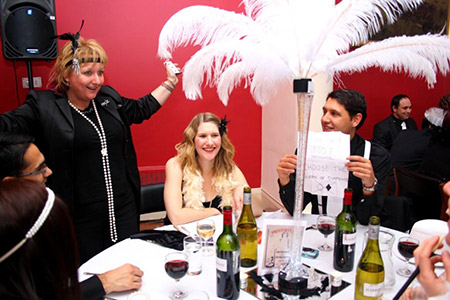 Jayne Corrigan is a professional magician.

Jayne performs magic at venues all over the UK and with very few professional female magicians around the world, Jayne has been booked to appear in other countries too, including as far afield as Dubai. Jayne has been featured in various newspaper and magazine articles as well as being asked to perform magic live on BBC Radio on numerous occasions...

Jayne performs at a lot of Weddings, Black-tie Functions, and specializes in Table Hopping. As opposed to stage magicians and the large illusion shows most of us think of, Jayne only does close-up magic. The magic happens right in her audience's hands, using using coins, cards and borrowed items. Jayne says, "I try to hit the audience hard and fast and hopefully leave them wanting more!"

Jayne is also experienced in performing magic for Special needs groups such as Mencap.

I had some questions for Jayne and her answers were not only useful to me, but I think they will help any performer...

Q: What first got you interested in magic?
A: I had Paul Daniels magic set for Christmas and instead of throwing it away like other kids, I took it a bit too seriously!! On each Birthday I was allowed to go to London to the Giant Toy Shop, Hamleys, and in those days you went across a bridge in the shop to a small (what I thought was secret) room where all the magic tricks were kept! I was allowed one new trick each Birthday! My Chinese Sticks were my most prized possession!

Q: Which magicians have influenced you the most and why?
A: Gary Jones has been a huge influence and mentor for me; he gave me my first real introduction to being a Professional Magician. I also admire Lennart Green for his way out, thinking outside the box: and Darryl & Derren Brown because they are both such great showmen.

Q: What is your most memorable moment in magic?
A: Organizing a fund raising cabaret night for The Special Baby Care Unit that saved the lives of my twins. Not only did lots of fellow Magicians donate their time on the night for free, but numerous other Cabaret Acts and contacts I had met through Magic, also donated time, money and auction prizes that allowed us to had over a cheque for just over £4000.

Q: What do you feel is your greatest accomplishment as a magician?
A: Being one of only a handful of Female Magicians accepted in to The Prestigious Magic Circle.


Jayne's advise to upcoming magicians is also pertinent to all performers,

" Live it, Love it, Do it! If it feels good, do it! Lots of Magicians will tell you what you should or shouldn't do: but use your own judgment, listen to their views, but remember they are only someone else's opinion and maybe what worked for them. Follow your heart and live your own truth, it will show in your Magic! Magic is fantastic as a hobby or a Profession. To be paid for what you love doing, and to be paid for having fun - well life doesn't get much better than that! "

Thank you Jayne for taking the time to share. Information for this article was gathered through email conversations and from Jayne's webpages.

If you are a professional magician, gospel magician or gospel clown, and you would like to be interviewed for a profile on this site, please contact Dennis Regling at This email address is being protected from spambots. You need JavaScript enabled to view it.